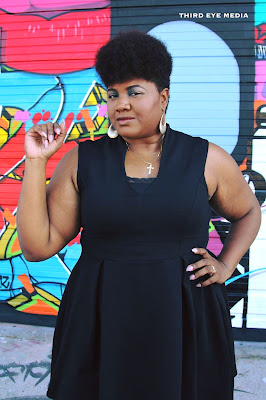 Inspired by: Movie - The Neverending Story's 'The Nothing'

TRU INTRO:
Que Pasa Mi Gente! My name is Ana Martinez-Wade aka Natural DominicAna! I am a native of the beautiful island the Dominican Republic, raised in Brooklyn, NY. I am 37 years old, a wife and mother to healthy children. To most, I am known as a jack of all trades but my true passion is being a positive role model to those around me. I am the founder of D.i.v.a.s in the Making Foundation, a KC Collaborator, and a Full Figured Advocate Model. In wearing all of these hats my mission is to help young-ladies and women alike learn and understand that we are LOVED because we are “...Fearfully & Wonderfully Made…”

TRUstory:
My TRUstory in facing & overcoming a ‘NOTHING’ in my life is not a typical one...between the ages of 5-6 I was sexually molested by a supposed family friend. I not knowing any better did not think or say anything about it for a long time. I was about 15 years old when that person showed up in my life once again and without hesitation, I told him to back off. Which to me was a strong move but as time progressed...I became more introverted and started making decisions that later impacted my life tremendously.
I felt worthless and useless. The only way to make myself feel any better was to be numb to the pain and fill the void with men that I thought loved/cared for me. I became a single-mother at 17, again at 19, had an abortion at 22 got pregnant again at 23...then got married and for almost 10 years of my marriage, it was literally HELL on Earth...I felt that NOONE understood my pain or anger that I felt...the people that I believed were supposed to be my support system were hardly there. I stopped attending church, talking to my mom, going to school and even talking to my friends.
By the time I was 23...I had contemplated suicide many times even after I got married I still saw myself as a NoBody, a NOTHING! I began to attend church every Wednesday night, Sunday morning, every function & revival possible but I would walk into church angry and bitter and leave out the same way. I started questioning if God even existed...did he really care about me?...I mean look at everything I had been through thus far….I must really be NOTHING!

TRU OVERCOMING:
I struggled with this for over 7 years. BUT one day in 2013 I was introduced to a group of God fearing women who had similar stories as I did...they shared with me their testimony and helped me learn and accept that I was SomeBody and SomeThing that God saw fit to sacrifice HIS one and only son Jesus for. I had to share my story and make it a testimony and help others with similar pasts overcome this feeling of NOTHING in their lives. Because God does not make mistakes and in Romans 8:15 we are not slaves to fear, we belong to Christ– that’s our identity. We are heirs to the Throne and we are loved! Ever since then I have faced some trials and tribulations but my joy and security rests at the feet of Christ because HE created ME and I am far from being NOTHING! I am “...fearfully and wonderfully made...Psalm 139-14!!!